I had a conversation with the new Command Sergeant Major at my army reserve battalion. It was a little one-sided. Those of you who have served in the military know what I’m talking about. I’m coming up on the end of my military career in the reserves, an ending that is not as much my choice as it is the army’s. With that said, I’m a little less likely to hold my tongue than I might have before. I’m still respectful, I just don’t pull my punches anymore, I leave no doubt as to what I’m thinking. I don’t remember exactly what I said that started, “With all due respect Sergeant Major.” But I know it was the truth. Then the Sergeant Major spoke. And what he said was also the truth. I had hoped to talk with him more that weekend, but with a busy training schedule it wasn’t to happen. So, I thought I’d write out what I would have liked to say to him.

The Sergeant Major sees a soldier that can’t pass the army physical fitness test. But he doesn’t see that until my deployment to Afghanistan (2013-14), I was passing the PT test at the standards of an 18-year old (the standards get easier as the soldier gets older). Yeah, I was in my early 40’s passing it with the numbers an 18-year old would have to do to pass. He sees an older, slower soldier. But he doesn’t see that the last two months of my deployment to Afghanistan I was injured. I sucked it up and completed my mission. He doesn’t know the doctor at my little base over there suggested I go to Germany for treatment, then home. He doesn’t know I decided to stay, despite the pain I was in. 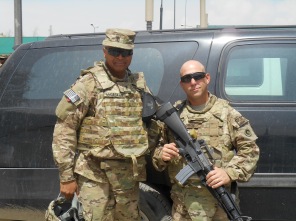 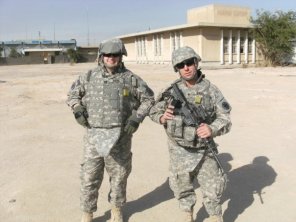 The Sergeant Major sees a soldier that lacks motivation. He doesn’t see my ribbon rack on my dress uniform. He doesn’t see that if I were to update my rack, I’d have 15 different awards on my chest. He doesn’t see all the times I volunteered for different things. He doesn’t see that at a previous unit, I had used up all my allowed time for the fiscal year but still drove 50 miles to give a brief for free (retirement points only). He doesn’t see that I coordinated the suicide intervention training for a CACOM I was in, and that my CACOM was the only command in USACAPOC that met standards by the deadline. Yeah, I got an award from the USACAPOC Command Chaplain for that.

The Sergeant Major doesn’t see me. He only sees what’s left of me. That’s not fair to either one of us. He probably doesn’t see that I’m my own worst critic and that I absolutely hate that I’m not able to do the things I used to do or handle situations and stress like I have in the past. He has no idea how valuable an asset I can be in the right environment. I could see it in his eyes that he plans on creating the right environment. I could hear it in his voice when he spoke to me. It’s a big job he’s taking on, and I don’t think the odds are in his favor, only because the problems he wants to fix have been there for so long. But I truly hope he pulls it off. It’s probably too late for me to experience the right environment again, but perhaps it will be there for future soldiers in that unit. When my time in the army reserves is over, I will leave satisfied that I made my area a better place overall. I might limp across the finish line, or even fall short of it altogether, but I did my job and did it well. And no one can ever take that from me, no matter what’s left of me at this point.

Thanks for stopping by Story of My Life this week. Good day, God bless.