I was mobilized for my second deployment in 2013, this time to Afghanistan. I was a chaplain assistant in the Army Reserves and was being cross-leveled and reunited with some great people that I previously served with. I was going back to the 143d ESC family, this time with the command. I had previously been in a battalion within that organization where I was a chaplain assistant to the chaplain I would now be going to war with. We would spend more than a month that summer at Ft. Hood, Texas, training for the upcoming mission.

During that time at Ft. Hood, it was to be decided which personnel would be going to Kuwait with the main body and who would be going to Kabul, Afghanistan and be attached to the 1st TSC to become part of their mission. I was going to Afghanistan. Then it changed. Then it changed again. When the rosters were finally finalized, my chaplain and I were in fact going to Afghanistan. A group of 80 of us, or so, left Ft. Hood on August 8, stayed a day and a half in Kyrgyzstan, then arrived in Kabul on August 12.

Believe it or not, there was some miscommunication between the unit I was in and the unit I was being attached to in Afghanistan. I know, right? Miscommunication in the army? No way! Believe it. When my chaplain and I got there with the rest of the soldiers being attached to the TSC, the chaplain and I were not on the TSC’s list to be there. “Who are you? Why are you here? We weren’t expecting a Unit Ministry Team.” Umm… I’m still getting paid, right?

The new unit wasn’t sure what to do with us and didn’t have office space for us. The Chief of Staff for the TSC told my chaplain and I to go see the chaplain with USFOR-A, at his office in the basement, and ask if they had anything we could do or help with until the TSC figured out what to do with us. (USFOR-A = U.S. Forces-Afghanistan). The Chief of Staff  told us to work with USFOR-A, do what they do, and that we would get some office space with the unit soon enough. So, we went to the basement and integrated ourselves in with the USFOR-A chaplain team. That miscommunication ended up being a good thing for my chaplain and me as far as I’m concerned. It was like getting bonus adventures on what was already going to be an exciting deployment.

By the third day of the deployment, I was already getting outside the wire on missions with the USFOR-A chaplain team going to other local bases in Kabul. We were told to work with them and do what they do. So, we did. The USFOR-A chaplain team was busy, always going somewhere. Some of the missions I went on with them included taking the USFOR-A Command Chaplain to meetings, picking up the AFCENT chaplain for a visit, attending the weekly NATO ceremony at ISAF (International Security Assistance Force), and more. 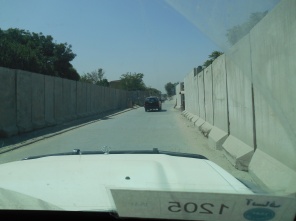 My usual view from the passenger seat while TSgt Hivner drove, in and around Kabul.

On a side note, the USFOR-A Command Chaplain at the time was CH (COL) Hurley. He’s now a two-star general and the U.S. Army Chief of Chaplains. To this day, he is still the only chaplain to make me drop and do push-ups. But eventually, he warmed up to my sense of humor. And I’m sure that working with me is what set him apart from other candidates for the Chief job. He probably used me as a reference. Ok, that last part might not be true. (This would be one of those moments when CH Hurley might tell me to do push-ups). 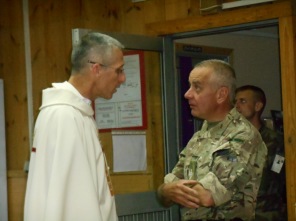 Left:  CH Hurley after a chapel service at ISAF.  Right:  Me and my chaplain at the left,  CH Hurley and CH Fredrick on the right, SGM England and Air Force TSgt Hivner (Both USFOR-A chaplain assistants) kneeling.

One mission I went on with the USFOR-A chaplain assistant was to get a vehicle serviced. More specifically, to get the Duke system updated. The Duke is a device mounted on a vehicle that jams remote controlled IEDs. Some improvised explosive devices would be placed on convoy routes and could be detonated from a distance by the enemy with a cell phone or other type of remote control. Our Duke was non-operational that day. Completely dead. We had to make the short trip to Camp Phoenix without the protection it offered. But we made it there without incident. 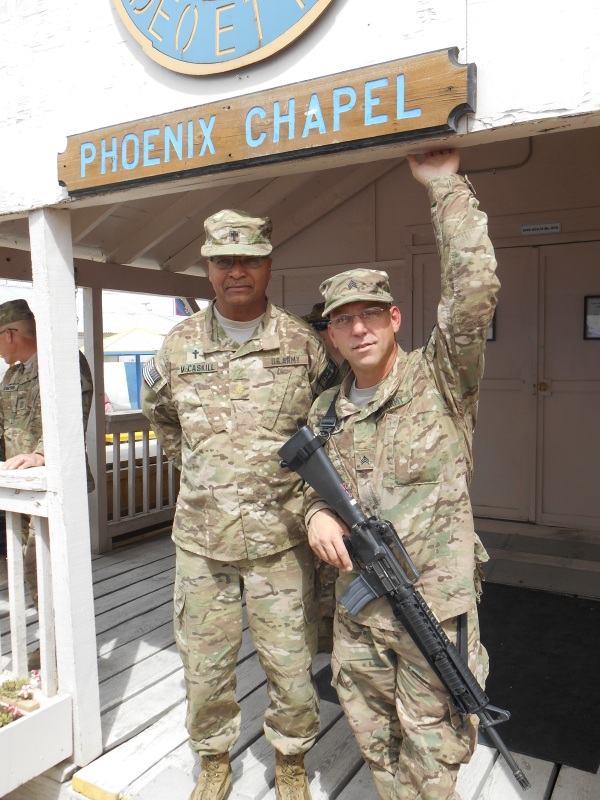 On another mission with the USFOR-A chaplain team, we walked from our base to ISAF. It was a short walk, but to me, it was very exciting. It was a close-up view of the area that I could not get in a convoy or on a helicopter. I filmed the whole thing with a camera attached to my gear. I had my long rifle and my sidearm with me, both locked and loaded, both ready to go if needed. The following week, we were set to walk to ISAF again, staging behind the back entrance of the building we worked in. Keep in mind, we were told by the Chief of Staff to work with USFOR-A and do what they do. Imagine the surprise my chaplain and I had when our Command Sergeant Major showed up, about to pop a blood vessel in his forehead after finding out we did a walking mission the previous week, telling us that we are not authorized to leave the base on foot. He was livid. We made other transportation arrangements and still completed the mission.

I thought we were going to be in trouble, well me, not so much the chaplain. When a Command Sergeant Major expresses his displeasure with you or your actions the way mine did that day, it can often mean you are in some sort of trouble. But, there was nothing in writing saying we couldn’t walk and we hadn’t been told not to. And the Chief of Staff told us to do what they do. We simply ended up being told to not do that again. Two positive things did come from that day. First, the entire command was given a memo very specifically detailing the proper procedures for going on any mission, to include prohibiting any walking missions. I should get a ribbon on my uniform for effecting such important change in a two-star command. Second, they finally gave us office space upstairs with the rest of the unit. I guess they wanted to keep a closer eye on us.

Thanks for stopping by this week and checking out my 100th post to Story of My Life. Good day, God bless.