I’ve made a number of new friends in the last few months since I started blogging again. Friends from all over the world. Recently I was chatting with one of my new friends that lives in Australia. We determined that she lives fifteen hours ahead of where I live. That brought back a childhood memory of when I lived in Japan as a military dependent. If I remember correctly, I was sixteen hours ahead of where home was in the United States. I remember thinking that if we were almost a day ahead of back home, why couldn’t we just call and tell them what was going to happen. The illusion of living in the future I had as a child didn’t quite work the way I thought it should back then.  Check out my friend’s blog, it’s pretty entertaining:  https://katemeyer.org/.

Now as an adult, time is still an illusion to me. Where has the time gone? Why can’t I remember a timeframe of certain things from the past? I don’t have time for this. This is taking too much time. Time, time, time. In a previous blog I wrote about not even knowing what month it was at the time when filling out paperwork at my child’s school. Even now, multiple times a day I have to ask or remind myself what day it is. Has time stopped working for me in some respect? Is that part of my PTSD, depression, anxiety illnesses? Sometimes I feel like the deployments I went on were a million years ago, sometimes I feel like I just got back. I’ve been back from my final one for two years.

There are periods we’ve all felt that time stood still. Also, moments that time seemed to fly by. Emotions, surroundings, and other tangent factors give each of us the feeling of how time flows for us, “fast” or “slow”. The fact is, a day has twenty-four hours. Every single day. The same. The sun may shine longer in some days than others, but the length of each day is still the same. Then why is it that we have times that drag on and times that zoom by? How can some events or periods in life have aspects of being both slow and fast? 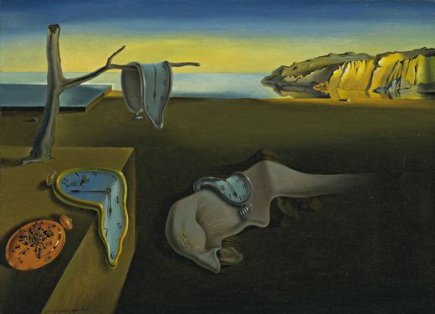 Salvador Dali, The Persistence of Memory

During each of my deployments, I was gone from home for a year. During the time I was gone it seemed like it was lasting forever. After returning, it didn’t seem like a year at all. How is that possible? I can tell you with certainty, the slowest a clock will tic-toc is when there’s only a few days left of deployment. That span of time feels like an eternity. But I think the slowest that time ever dragged for me when we were on our way back from Afghanistan.

On the first leg of our trip home we flew in a C-17 from Bagram Air Field to Romania. We were supposed to land at a base called MK, but weather dictated we land in Bucharest. We sat on the tarmac for hours while waiting for busses to take us on the three or four hour drive to MK. That period of being stuck on the plane seemed like days instead of hours. We were not allowed to disembark. We were not allowed to go into the airport and stretch out and get food. We could only stay on the plane and sleep uncomfortably until the busses arrived. Sleep if we chose to. It was hard to sleep, so some of us just stayed awake. I’m sure that contributed to time going so slow.

I didn’t sleep on the bus ride either. I had never been to Romania and didn’t want to miss anything. I wish I had slept though. When we got to our destination the commanding general of our unit had flown in from the States to meet us and wanted a re-patching ceremony. That was to happen before we could sleep. What an ass. Long-winded, boring, knowing we had been up or had little sleep the last thirty-six hours or more, he still chose to make us stand in formation while he spouted out whatever it was he was saying. Fuck off, Sir, we’re tired. That’s part of what’s wrong with the army, selfish leadership.  It was all photo ops and ego for him.

One night in Romania turned into two. But eventually we were on our way home. The trip from Romania to Maine, with a stop in Germany, was on a commercial plane. It was much more comfortable than a C-17, easier to sleep in the seats, and we got airline food instead of MREs (Meals Ready to Eat). There was a layover in Maine before flying back to Ft. Hood. That layover might be ranked second on my list of time standing still. I think we landed around 2 a.m. to a welcoming committee of local military supporters. They opened all the shops in the small airport for us and made us as comfortable as possible. But time stood still. Even with their wonderful hospitality, those few hours in Maine seemed to last forever.

We are obsessed with time. Everything has a clock, everything has a schedule. Maybe it’s my military upbringing and time in the Army, but I have to be on time for things. It makes me crazy to be late. And what’s worse? Watching people consistently be late and not care. That shows lack of character. (I hope some of my fellow Soldiers from my reserve unit read this and take note). I know sometimes we run late. It happens. But if you are always late and aren’t even making an effort, you suck. (My rant about slackers is over).

Time doesn’t feel the same to me as it used to. It doesn’t seem to matter to me anymore. The American rock band Chicago asked it best, “Does anybody really know what time it is? Does anybody really care?” (Now that song will be stuck in your head the rest of the day, you’re welcome). I don’t think I care anymore about time. I’m tired. I don’t see much use for it now. Of course I’m lying. I am a slave to time, I can’t help it. But I do wish I could see the future like I thought I could as a kid. That would be nice.

I don’t know the route we took, but we finally made it to ‘MK’.  You try to pronounce it. 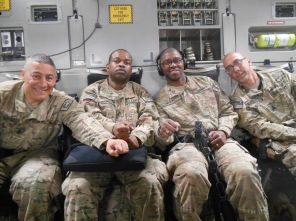 Crowded on the C-17, but looks like this guy got some sleep on the bus.