I don’t make a big deal about my birthday.  I don’t usually tell people when it’s coming or take the day off from work.  It’s really just another day to me.  But this time is different.  This will be a landmark I really didn’t expect to make.  In a couple days I’ll be 50 years old.  50.  Fifty!  Half a hundred.  It’s not as old as it sounds, so I keep telling myself.  But it does feel old some days.

Actually, I feel pretty good overall.  I don’t look my age, so I’ve been told.  I certainly don’t act my age, and don’t plan on starting any time soon.  My body hurts with aches and pains now more than ever before, but I’m getting used to it.  Considering what I’ve put my body through in the first 49 years, I’m just thankful to be here.  My memory sucks.  Although I can remember song lyrics and movie lines from the 1980’s like I just finished hearing them.  But for some reason I can bring up Google on my phone and forget what I’m searching for at the same time.  Go figure.

It’s been a wild ride so far.  Many successes, many failures.  Way too many failures.  One thing I don’t think I’ve ever talked about in my blog is my past business ventures.  I’m 0-5 in business endeavors.  That’s probably why I haven’t mentioned it before.  LOL.  But one of my favorite failures in business is when my daughter and I opened a restaurant together.  It was short-lived, but it was a wonderful experience.  It was a huge success just getting it opened.  One of the 0-5 businesses includes starting a sub S corporation with a buddy of mine that we ended up doing nothing with.  Does that even count?  I still have the corporate seal and binders from that one.

I feel like I’ve worked a thousand different jobs in my life.  My first job where I received a W-2 was at a TCBY.  I made $3.35/hr.  My second job, before shipping off to Basic Training, was construction.  That lasted one day.  Since then I have had an eclectic variety of jobs.  I’ve worked in the food service industry in a number of different of capacities, including at a restaurant in an airport. I’ve driven produce delivery trucks, worked at different retail stores, served in the United States Army Reserves.  I tried sales jobs twice, not for me. And now I have a job I would have never guessed in a million years I would be doing.  I work for the sewer department for the city where I live.  It’s a shitty job (sewer humor), but I actually enjoy it.  Most of what we do is not nearly as bad as you might think.  But there are those days….

I’ve done some pretty cools stuff in my life.  I’ve been to over a dozen countries.  I’ve been inside the White House.  I’ve been inside the gates of Buckingham Palace to watch the Changing of the Guards up close.  Somewhere I still have the invitation from that incredible day.  I’ve climbed Mt. Fuji and ridden on the Bullet Train.  I had a 1967 Mustang for a while.  That was my favorite car of all the ones I’ve ever had.  I’ve surfed in the Pacific and swam in the Atlantic.  I’ve dipped my toe in the Bay of Bengal and I’ve caught a shark in the Gulf of Mexico.

I’ve gone to war twice.  I received the Bronze Star at the end of my last deployment.  We traveled extensively while in Afghanistan.  And when we did, it always seemed like someone was trying to kill us.  We survived being shot at and enemy rocket attacks.  We could feel the explosions shake the buildings when we went to Kandahar and Bagram.  We flew on some helicopters that probably could have used some extra maintenance, but we survived that, too.  Of all the airplanes we boarded over there, the British C-130 was my favorite ride.  From take off to landing, it was like a rollercoaster on steroids.  I loved it. I’d go back for a day if they let me do that again. But they won’t. I got medically retired a couple years ago.

My life might seem like a completed bucket list for some, and I barely scratched the surface here.  But there is so much left to do.  What could possibly be left?  To just live.  That’s all.  Every day, just live and enjoy life.  I still fret over some of my failures, but I don’t let it consume me.  I still smile about the few things I’ve been successful in, but I know I’m not done, there’s more to come.  For example, later today, I plan on successfully taking a nap.  That might not seem like much, but sometimes it’s the little things that can make a whole day successful.  Don’t ever forget that.  So, Happy Birthday to me, I’m old now. And I’m grateful to still be rotating on this Earth and orbiting the sun.  Thanks for stopping by today and listening to me ramble on as I look back at my first 49 years. It’s really been a good run so far.  Good day, God bless.

I was on the wrestling team in high school. I did well. My junior and senior years I won the Regional Championship in my weight class. I had a natural talent on the mat. I also had a great coach. He was a tough S.O.B., but to this day, I still carry some of what I learned from him all those years ago. In the state tournament my senior year, I lost in the second round by one point in overtime to the eventual State Champion in my weight class. It was a hard loss. I still carry that, too.

This week I attended two sporting events that my kids participate in. Middle school tennis and track. My twin girls are each a student athlete, one in each of those sports this season. I was watching a boy’s tennis match after my daughter finished her singles match. One of the young men on the court was hustling, running, playing his heart out to make it a competitive match. The other young man, who was a little further along in his adolescence, put in far less effort and still won the match 6-5. It was a great match. The young man that lost probably played one of his best matches ever, but still fell short. As soon as he got off the court, I heard him ask the coach if he could be in the doubles match against the opponent that just bested him. He was not going to give up, even though his chances of winning were not good. I like that kid. He’s not afraid of a challenge, and not afraid to fail.

Isn’t it challenges and failures that make us better? Or at least strive to be better? Granted, you must have the desire to put in the work to get better since natural talent can only carry one so far. Of course, there are exceptions, but for the most part, natural talent without hard work to elevate and hone those talents usually leads to mediocrity. Did you know that Michael Jordan was told his sophomore year in high school by the coach that he wasn’t good enough to be on the varsity basketball team? He failed to make the varsity team. He didn’t quit, he played junior varsity that year, worked hard, and ended up becoming, arguably, the best basketball player of my generation. Failing may have been the best thing that ever happened to him in high school. It sparked a desire to succeed. And that, he did. 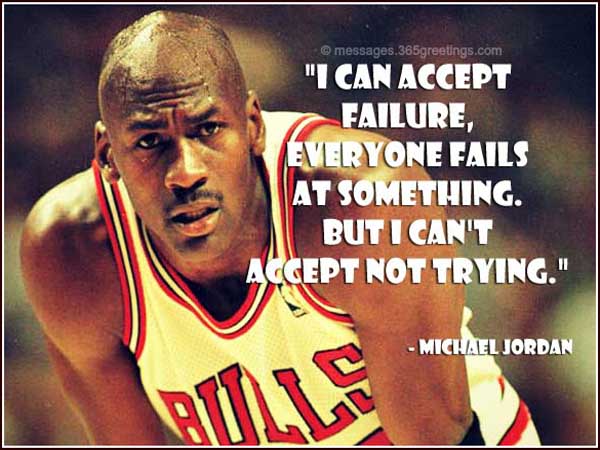 Sometimes I think back to the State Tournament my senior year and wonder if 10 minutes of extra practice or work a day would have made a difference. I don’t dwell on it, it’s more of a nostalgic memory, remembering good times. It was a terrific match. It was the best I ever wrestled, and I fell short. I think most of us in life have had that experience. Here’s why that loss was tough: There wasn’t a next match for me in the tournament. I was a senior and done with my wrestling career. But the kid that lost the tennis match has many games left in him. He may not have the success that Michael Jordan had, but he has the determination to keep trying.

I miss that determination in my life. I lost it in 2015 and I almost died because of it. Maybe I lost my determination before then and was just trying to survive on my life’s natural talent, whatever that is, and it finally took its toll on me. I got tired and gave up. But I’ve learned some things. There is a time and place to have the determination of the young man that lost his tennis match. There’s a time to be mediocre and survive the storm, even taking a couple steps back. And there’s a time to simply pace yourself while moving forward, with no need to be a hero and no need to keep running into the brick wall at full speed. That’s where I’m at in life right now. And I’m OK with it. I’m moving forward. I’m taking it at my own pace. And I’m going to survive.

Gone are the days that I need to go full throttle with everything in life. I’m done running into walls just to prove I can. I already know I can get back up and do it again if I wanted to. No need to keep proving it. I’m content with being mediocre because I’m still moving forward. And also because I have such wonderful memories of all the times I ran into those walls and got back up and succeeded. And I mean that. I’ve learned a lot from my challenges and failures, and those subsequent victories. Victory after failure is sweet. I hope that young man on the tennis court experiences that.

Thanks for reading Story of My Life this week. Good day, God bless.